It’s been over three months since I’ve written a blog post. Again. My attentions have been elsewhere. 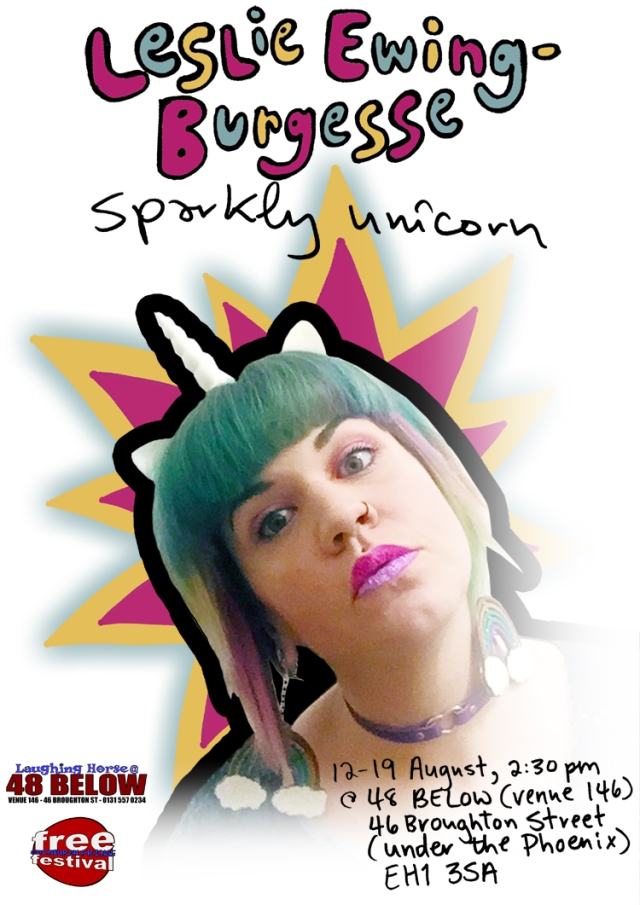 I’m doing an Edinburgh show this year, for eight days. It counts. It more than counts. The longest standup sets I’d done until recently were ten to twelve minutes. This show is an hour. I did my first preview at the beginning of this month and I think it went the way first previews should — gloriously at moments, a bit terribly at others. A few friends from work came along, and made up the entirety of the second row (and about 5/8 of the audience). It felt a bit scarier for having people I know and face every day right there in front of me, but it was incredibly comforting, too. Them believing in me was comforting. I reminded them annoyingly often not to expect anything great (doing really well at believing in yourself there, Leslie…!) because it was a first preview — not only of this particular show, but ever — and my first time spending that length of time talking on a stage. Cally, the exceptional human and comedian with whom I previewed, had the genius idea of putting comment cards out on everyone’s seats, and as such I got three cards back with some incredibly positive feedback regarding the bits of the show that worked. I look at those three comment cards every now and then because they make me happy.

It’s been a really intense and rewarding time, working on a show.

It feels sometimes like all there is. It feels like I’ve become incapable of thinking of anything else. It feels like I’ve probably become a bit dull to speak to, because it’s most of what I have to talk about. At the same time, though, if I wasn’t doing this I don’t know what I’d be doing. It’s given me a new sense of purpose. I’ve come up with some really good standalone bits of material. My brain is writing, constantly writing. I’ve always adored writing, always turned to writing to help my brain come to terms with things, and now there’s this. Now there’s this thing that I think I’m going to love, that I think I’m going to be proud of. I will write this show and I will perform this show and I will, in some small way, be different. I will, in some small way, be better.

I really love it. 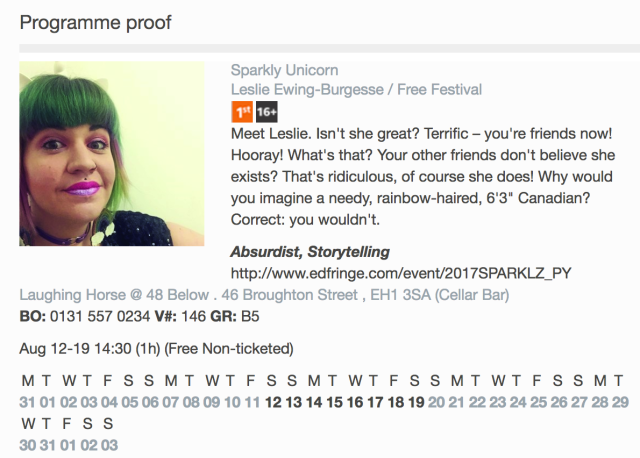 So. There is that.

I passed 100 gigs in March. I guess that pales in comparison to the whole doing a solo show thing, but the show comes partially as a reaction to that. It came about on a whim. I did promise every last person I spoke to in Edinburgh last August that this year I’d be doing a show, and then realistically telling them it’d probably be a split-bill, it’d be a bit ambitious (and expensive) to do a solo show my first time around. But then I never got around to trying to find a person to split an hour with, and then everyone was applying for their venues and I thought I’d come to terms with the idea that I wasn’t going to do Edinburgh this year after all, it wasn’t practical, I needed to save money because my visa expires next March and I need to give the home office so much cash in order to remain indefinitely after my visa is done and of course I will, this life is absolutely perfect and there’s no way I’m giving it up, no fucking way… then I thought maybe I’d try to apply for a venue just in case, because I was intending on going up for the whole festival again anyway. So then I started writing.

In other life news:

I got a memory foam mattress pad, with financial assistance from my ridiculously generous Mom. I also bought a new duvet cover, because I can’t resist bright colours.

Also, it’s 25 degrees outside and, as you can tell, I’m sitting in my bed writing this and drinking hot coffee. C’mon, Leslie!! Submerge yourself in some water or something!!

This past weekend I went to Newcastle, where I’d never been before, because it was my dear and amazing friend and coworker Gemma’s hen do, and that’s where she’s from. It was all good people and so, so, so, so much karaoke at a place called Cosy Joe’s and acting out Last Christmas by George Michael at a free indie club night and drinking prosecco on a train at nine in the morning and discovering a hill covered in garlic flowers (gar-lic hill! gar-lic hill!) and chanting every single possible thing consisting of three syllables and basically, if you can’t tell, it was extremely excellent.

Work remains good, and I love and am so happy to know everyone I work with so, so much. I’m getting really good at making coffees, which you likely know anyway but hey, I like positive attention, why try to deny it?

I really don’t feel like I have much else to say. Remember what I said about my show taking over my brain…? Plus it’s hot in my extremely comfortable bed. I need to submerge myself in water. Maybe this water, if I’m brave. This water, if I’m not.